Skip to content
Forza Horizon 5 is good because there are more than 500 car models at the start, and almost from the first races the player starts to be literally “bombarded” with cool cars. No tattered troughs that you have to drive for hours to get at least one sane car in the end. Only luxurious cars, only luxury and glitter! So, seeing all this, not everyone understands that the conditional Corvette Stingray should not be used in absolutely all kinds of tracks, because it is only effective in the races on a flat road, and, for example, on off-roading is guaranteed to graze the rear. To choose the right car to win the race, it is worth right after you enter it. And the game itself will write which models from your garage are recommended for each individual race, but you should pay attention not only to this. If you take part in street races, you should always take a car with high speed, controllability and acceleration characteristics. And when it comes to off-road races, the car should have a high off-road performance. By the way, if your garage does not have the right car for a particular race, then I recommend buying it right away, because it is almost impossible to win a race with the wrong model.

Full throttle is not a good idea 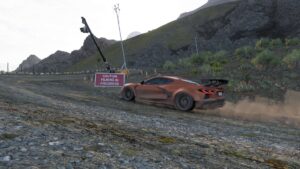 Seeing the variety of cool cars in Forza Horizon 5, many people begin to press the gas into the floor and run around the map like crazy. Unfortunately, such a driving doesn’t work in races, even if it is not the full-fledged simulator. You are unlikely to enter even the easiest turn at high speed, which means that on such segments rivals are sure to overtake you. Carefully follow the arrow that tells you how to drive, and when it turns red, always brake! On the turns to slow down straight must, otherwise you start crashing into absolutely all the obstacles that are in the race, and lose your position in the competition. By the way, if you are racing on the difficulty “Experienced” and above, in fact, you can win only if you can competently enter the turns. As a rule, the AI will not let itself be overtaken on a straight road, even if it has a worse car than you. This is how the complexity of the game works. So always slow down on the turns and successfully enter them. It is by successfully passing such sections in races that you will begin to come first on the high difficulty. 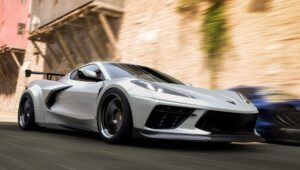 Each race allows you to rewind time if you pass a checkpoint. Some players ignore this feature for some reason, although it is the only way to get there in one attempt and pass this or that race. Also, if you use rewind in time, you will save a lot more time than starting the race all over again after each failure. Also, I would recommend rewinding time by at least 2 segments back rather than 1. The point is that after you return to riding from your previous point, you’re only given a couple of seconds to gather your strength and still get through the difficult section. If you rewind a little bit, you’ll have more time to think, and you won’t receive any penalty to experience or currency received at the finish line. So take advantage, especially if you’re playing at difficulty level “Experienced” or higher.

Don’t forget to “pump up” your car

Forza Horizon 5 has a system of skills that are pumped by getting special points. Usually the points are given for good driving, drifting, long jumps and other stuff you are going to do while driving in Mexico. Well, not everyone knows that you need to pump each car separately, not one skill branch that works for all. Naturally, if you have a lot of cars and you drive each one, it causes some difficulties. Therefore I recommend that you choose 3-4 cars, which you will travel around the map and pump them. Skills are mostly very useful bonuses: like experience boosters, currency multipliers and free spins on the Wheel of Fortune. The main thing – do not try to pump every car, because you’ll get tired of this and at some point will just forget. Choose a few of your favorite cars and first pump them.

Break down all the “signs.” 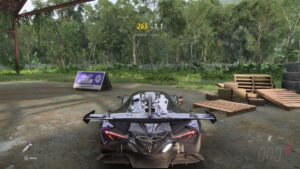 Surely after a couple of hours of driving through Mexico, you will come across wooden signs that are periodically found somewhere near the main roads. Be sure to smash them! This is one of the ways to get the additional experience you need to level up and get access to the new features of Forza Horizon 5. It’s worth noting that these experience shields are always located somewhere off-road. Sometimes you can just drive off the main road and see the shield in the nearest forest. Keep in mind, however, that initially they are not on the map. The sign with the shield will appear on the map only when you are close to it. So, when racing through Mexico at crazy speeds, don’t forget to look at the map so as not to miss such useful experience boosters. 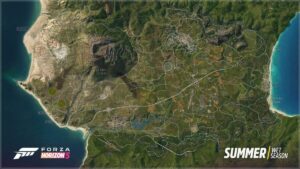 The variety of races in Forza Horizon 5 is really breathtaking, and at some point you may realize that you haven’t seen Mexico and you are just moving from one race to another. Especially at the beginning of the game you should not do so, because you deprive yourself of the priceless experience that is given for the discovery of new terrain and roads. Thus, up to about 20 levels it is worthwhile to explore the entire map. First, you will quickly raise the level due to the experience that is given for the discovery of terrain. And secondly, guaranteed to find new types of competitions and local hubs, where you can communicate with the players and take part in network races. Exploring doesn’t take much time, so I advise you not to neglect it.

One of the coolest features of Forza Horizon 5 is the search for vintage cars. To dig out some vintage car and drive it around Mexico in the near future, you just need to travel around the map and look for old garages. They are usually not marked on the map, only the area where the rarity is located is shown. If you pass by such an area, be sure to stop by. To open a rarity, just drive up to the garage with it. After that, your Festival mates will take the car away for repairs. You will have to wait for some time until it will be restored, and then you can already drive the rarity. Usually you cannot wait long and after a couple of races you will hear that joyful bell. Well, as for the rarities, there are a lot of them in the game. These are really cool cars that are worth trying.

Sometimes there are situations that you can not win the race, and you do not have time to press the “Restart” button. As a result, to try again, you are forced to go almost through the whole map to the point with the race, and this is annoying. To get rid of such difficulties, the game has a fast movement, but initially it is, firstly, paid, and secondly, only to the houses you bought. To make fast travel more comfortable, you should look for the special Fast Travel shields on the map and knock them down. Unlike shields that give experience, these are usually in fairly inaccessible places, such as on the roof of some house. However, with a little forethought, you can still knock them down, and that reduces the cost of fast travel. And if you knock them all down, you can teleport for free. You should also save up for the Buenas Vistas house in the Baja area, so you can teleport to some of the roads. All of this will help save time on the long drive through Mexico, which, you might be surprised, after about 10 hours starts to get boring. 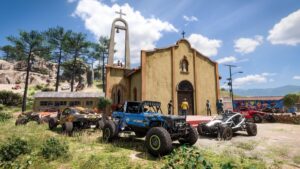 Surely you are well aware that it is in the game, but for some reason from the beginning no one explains how to enter it. In fact it’s quite simple: in order to use the photo mode you just need to press the up arrow on the gamepad. And it’s not just for creating pictures just for yourself or to put them on the start screen of the console/PC, but also for the seasonal achievements. Typically, each week one of the achievements is to take a picture of your car in front of some house or landmark. I recommend always doing it because it’s as easy as possible, while still giving you some nice rewards. Often you can get a car or just a small amount of credits for the picture, and points in the seasonal competitions, of course.

And finally a nice bonus for those who want to get a rare DeLorean for only 15,000 credits without completing quests and participating in difficult races. You need to go to your car collection and find a blank DeLorean card there. Nothing will happen when you click on it, but if you exit your car collection and come back again, the opportunity will appear. You simply press “Y” and you are given the opportunity to buy this rare car for only 15,000 credits. Obviously it’s a glitch, but since it’s unlikely anyone will be fixing it just yet, you’re free to use it (if anything, a new update to the game was supposed to come out this week, but it was postponed). And if you already have a DeLorean or you’re not interested in it, this trick works with other cars as well, just try to do everything described above in your car collection.
On