Skip to content
DICE introduced the specialists in the new Battlefield 2042 gameplay video, and we learned their skills, specialization, and motivation. In Battlefield 2042 we won’t see the standard division into character classes (assault rifleman, scout, support, engineer). Instead the developers decided to follow the current trend and introduce the system of specialists in the game, similar to the one that was in Apex Legends or Rainbow Six: Siege. Each of them will have a unique character, specialization and abilities, and the weapons will be chosen by us. Unfortunately, this change was not liked by all fans. Therefore, DICE (the studio responsible for the game), in order to dispel all fears, decided to present how the specialists will affect the gameplay, in the following gameplay video (with the familiar theme music in the background). 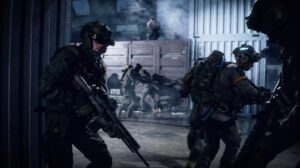 If all goes according to plan, there will be 10 specialists in the game at launch. Others will likely join as part of the post-release content. So far, DICE has introduced us to five of them.

Battlefield 2042. The experts themselves introduce themselves as follows (descriptions taken from the game’s official website):

Other specialists will be announced later this month. Battlefield 2042 will be released Oct. 22 on PC, PlayStation 5, Xbox Series X / S, and PlayStation 4 and Xbox One.
On