Skip to content
MSI unveiled three new gaming laptops based on 12th generation Intel Core processors. They are positioned as solutions for the meta-universe and are equipped with top hardware. Let’s talk about each of them in detail.

This is a laptop with a top-of-the-line Intel Core i9-12900HX 12th generation processor and an NVIDIA GeForce RTX 30 graphics card. There is a choice of options from the budget RTX 3060 to the powerful RTX 3080 Ti. And both chips – the central and graphics are able to work at full power without any restrictions. The exclusive OverBoost technology allows to raise their total thermopackage to the level of 250W. 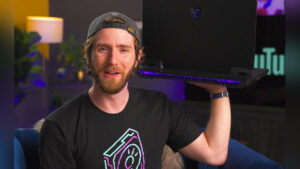 Just like desktop PCs, the Titan GT77 has four slots for DDR5 memory. Its total capacity can reach up to 128GB and data transfer speeds of up to 6.4Gbps. As for the permanent memory, the laptop has four M.2 slots, one of which supports PCIe Gen5 mode and the rest are PCIe Gen4. You can install solid-state drives with a total capacity of up to 8TB in them. 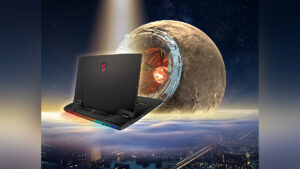 The Titan GT77 features a keyboard with Cherry MX Ultra Low Profile mechanical switches that are specifically designed for mobile computing. It features full RGB backlighting with the ability to program the glow of each button. The cooling system includes 4 fans, 7 heat pipes and 6 vents. 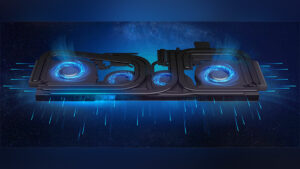 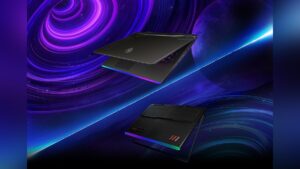 There’s a 99.9-watt-hour battery, a SteelSeries keyboard with customizable full-color Per-Key RGB key illumination, and Duo Wave speakers from Dynaudio. Special mention should be made of the cooling system, which includes two fans and seven heat pipes. In the model GE67 OLED screen 15.6 inches diagonally with a frequency of 240 Hz and a resolution of 2560×1440 dots. Note that this is the first model in the world with such a display. The other indicators are identical to the larger model. 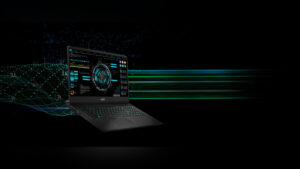 The Cooler Boost 5 cooling system is built with 2 fans and 6 heat pipes. There’s also a SteelSeries keyboard with customizable full-color Per-Key RGB key illumination. MSI Center app with a gamer mode and new features as well as the MSI App Player for launching mobile games on the PC platform are also worth mentioning. 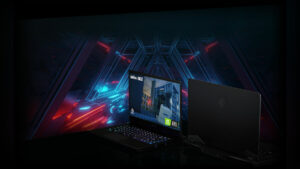 The newest Wi-Fi 6E wireless module and Hi-Res Audio certified speakers are also nice change features. The GP66 HX is the same as the older model in almost everything, only it has a 15.6-inch screen with a resolution of 2560×1440 pixels and 240Hz.

MSI introduced the CreatorPro X17 with a 16-core 12th generation Intel Core i9-12900HX processor and NVIDIA RTX A5500 graphics card for notebooks. This laptop has a 17.3-inch screen with a resolution of 3840×2160 pixels and 120 Hz. An IPS matrix is used. In the maximum configuration is installed a professional graphics card NVIDIA RTX A5500 with 16 GB of memory. It is possible to install up to 128 GB of DDR5-4800 RAM (4 slots), there are also 4 places for NVMe, M.2 drives, one of them on PCIe Gen5, the remaining three on PCIe Gen4. There’s a SteelSeries keyboard with customizable full-color key illumination. 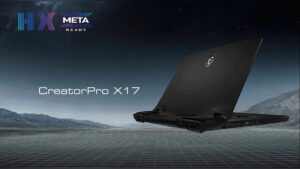 A fingerprint scanner is responsible for security. Networking options include Intel Killer Ethernet E3100G wired connection (up to 2.5Gbps), Intel Killer Wi-Fi 6E AX1675 and Bluetooth 5.2. The audio system includes two Dynaudio speakers. Of the connectors, there is one combo audio jack, one mini-DisplayPort and HDMI each. There are also two Thunderbolt 4 and three USB 3.2 Gen2 Type-A. The battery is 99.9Wh and the charger has 330W of power. All in all, all three gamer laptops can perfectly “perform” in games and in work. All of them will appear on the market in the near future. The fourth, on the other hand, is designed for work. You can watch the video below:
On