Skip to content
Chivalry 2 is a fun medieval meat grinder where you can do almost anything in multiplayer mode. Nevertheless, for beginners, the basic mechanics of the game can be quite challenging. If you don’t want to turn into mincemeat on the battlefield over and over again and eventually lose interest in the project, just read our guide. We have collected the most useful tips for those who are going to break into medieval carnage for the first time.

Let’s start with the fact that you can learn to play Chivalry 2 only by mastering the local combat system. It is better to do it in the suitable mode, where you won’t be distracted by disgruntled teammates in the chat and have the opportunity to revive quickly.

The Every Man for Himself mode is an ideal way to get started. 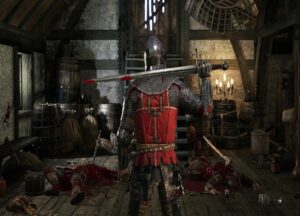 It is recommended to spend at least a couple of days until you fully get used to the game and its combat system. Here it’s every man for himself, and you are instantly revived after death. This mode is perfect to test different classes in Chivalry 2 and all kinds of weapons. Once you are able to sharpen your combat skills, you can try the team modes for 48 or 64 players. Then you won’t get annoyed in the chat, because you will be able to at least something and also there is definitely a friend that didn’t read our guide and immediately after the launch of Chivalry 2 he started playing in the team modes.

The important basics of combat

So, in Chivalry 2 the combat system is the key component that you need to master first. Otherwise you will be killed all the time and you won’t get any pleasure from the game. To start with, we need to mention that there are 3 types of strokes in the game: normal, slashing and overhead. At the same time each move in Chivalry 2 takes away your character’s stamina. Consequently, once he is completely exhausted, you will lose the ability to parry and defend yourself in combat. Many newcomers, when they understand that there is parry in the game, start using it all the time. Yes, it helps not to get damage from any kind of attacks, but it “eats up” your stamina very much! The same thing happens to your opponents.

To start with, you have to learn how to use parry and start doing everything you can to make the enemy in the fight exhausted faster than you. 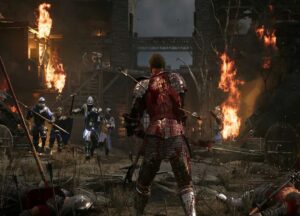 The easiest way to achieve this effect is simply to move away from the blade flying at you, and at the right moment to break your opponent’s shield with your foot! It’s the timely kicking that’s worth practicing first, because it won’t waste too much stamina on parrying and will destroy your opponent’s defense faster so that you can finally cut his head off his shoulders.

Don’t let yourself get surrounded

In Chivalry 2 almost all battles are lockdowns involving dozens of people. That’s why situations where someone is surrounded or cornered here are commonplace, and, of course, they all end in instant death of the poor soldier. You have to constantly make sure that something like this doesn’t happen to you. Basically, when you see 2-4 people coming at you, try to use the longest attack that only your weapon has, and constantly move. This will save time, maybe even kill someone, or it can happen that in all this “meat grinder” your potential offenders will be killed before they get to you. In Chivalry 2 warriors are very vulnerable from the back and sides, because you can only defend and parry blows that go straight to the forehead. Remember that!

In case you didn’t know, in Chivalry 2 you not only have throwing weapons, here you can also throw to your opponents and teammates everything you have. You can even throw your main weapon, but in this case you’d better have a good escape plan or at least a weapon near you. Otherwise this weird prank will very likely cost you your life. So for the newbies I’d advise against throwing your sword, spear or whatever you pick at random.

Throwing weapons is a very effective thing against enemies with low health. 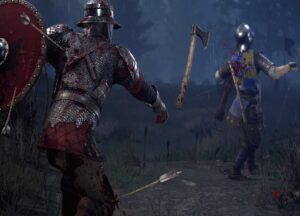 You should pick up the weapons of the fallen soldiers or some other objects at hand and try to finish off the “cowards” that are molting from the battlefield this way. Also I’d recommend the newbies to learn to throw weapons at opponents just before they die, purely by inertia. You’ll still get killed, but at least this way you can take someone with you. Use throwing weapons in Chivalry 2, and you will definitely be satisfied with the result.
On 17.09.2021