Skip to content
Horizon Zero Dawn Give Out Free On PS Store. In March, Sony announced the continuation of the Play at Home initiative and promised to donate ten projects for the PlayStation 4 and PlayStation 5. Nine of them, including Abzu and Subnautica, made it to the first distribution, which will last until April 23. Horizon Zero Dawn has now joined the list of free-to-play games in the Complete Edition. It can be permanently added to your personal library until May 15, 06:00 Moscow time. You don’t need to be a PlayStation Plus member to participate in the giveaway. Horizon Zero Dawn is a third-person open-world action game from Guerrilla Games and Sony Interactive Entertainment. In the game, users are shown a distant future, where high technologies are combined with tribal traditions. Robots-animals walk on the earth, and people, due to the happened apocalypse, returned to a primitive way of life. 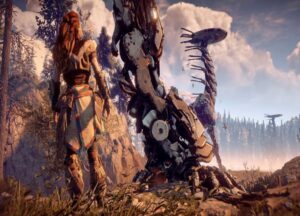 The main heroine of the project is a girl named Aloy, who will have to find out the secret of her origin, and at the same time find out the details about a pre-existing civilization. In the game, she needs to complete tasks, fight various enemies, including huge robots, explore locations, collect resources, upgrade, and so on. The Complete Edition includes The Frozen Wilds with a winter setting and storyline that reveals new details about one of the key characters in the story of the main game. New enemies, side quests and challenges are also included in the supplement.
On 20.04.2021