Activision has unveiled plans to develop Call of Duty: Black Ops Cold War for a third season, which will begin on the morning of April 22nd.
In the first week, players will take part in the Adler Rescue event, in which they will have to complete unique challenges to obtain unique weapon key rings, business cards and skins for operatives.

Owners of Black Ops Cold War will also receive a gift at the beginning of the season – Captain Price in 1984 themed outfit. It will be presented to all owners of the shooter for entering during the third season. 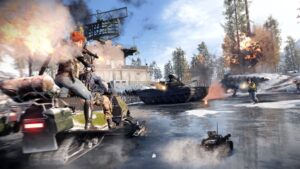 There are also 4 new maps awaiting players: Winter Yamantau and Mexican Diesel will appear on April 22, and Standoff remakes will be added during the season. In addition, for the Fireteam mode, they will present the Duga location in Russia in the Urals.

There will be two new modes – the classic “Sticks and Stones” (April 22), where players only have a ballistic knife, a tomahawk and a crossbow, and “Multiple Team Destruction” (throughout the season).

The latter is a chamber reimagining of the Black Ops 4 battle royale “Eclipse” on the Ural maps for the Fireteam. Only 4 teams will go to the map, the radiation zone on which will gradually expand.

Finally, Call of Duty: Warzone – a unique event awaits players, where the Verdansk update is expected. Fans are asked to make time for the upcoming Operation Rapid Sunder.